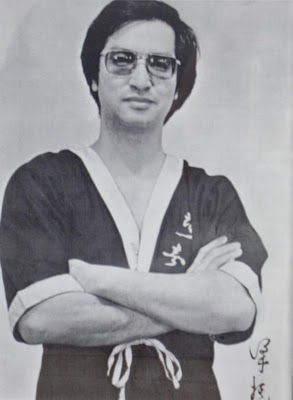 Leung Ting was born in Hong Kong in 1947 and he was a very cute little boy but physically weak and sickly, so much to be taken often targeted by his comrades.
It was the period in which the film excelled in martial arts films and he often identified himself in the heroes of those stories, which soon became his idols. He walked over to the martial arts so much to the chagrin of his parents that even arrived to forbid him to practice that type of sport.
It so happened that one day at the age of 13 years to defend a friend and cousin intruded into a fight, heedless of the numerical superiority of his opponents, but driven by his strong sense of justice. But he had to regret, as the friends they left him alone and was clearly overwhelmed.
His uncle, who practiced the art of Wing Tsun then decided to help this by presenting it to his nephew Leung Sheung, the senior student of Hong Kong Ip Man, who accepted him as a student.
The young man devoted himself to Kung Fu, so as to endanger his school career.
But his tenacity was also instrumental in this and was able to obtain excellent results and to be accepted by the Baptist College.
During the first year at the College, Leung Ting had much free time, then pushed his brother began to teach Kung Fu to a large group of students, also he began teaching as an assistant in the course of an uncle and had the chance to open its first school.
Leung Ting at the first appropriate opportunity, twenty, was presented by one of his older brothers practice to Ip Man that impressed by his desire to perfect their Kung Fu accepted him as his last student.
The senior Ip was well pleased to see the passion and tenacious dedication to studies of Gung Fu Leung Ting, and so accepted him as his last disciple in camera ( "Closed-Door Student", according to legend Ip Man had already closed its door to teaching), and during private lessons transmitted to him the most secret techniques.
Leung, in this way, had the opportunity to review and correct all he had learned.
Up to that time because it was never ever taught this art to Westerners, there was never a need to transcribe ideograms of his name in Western characters.
Bruce Lee was probably the first that transcribes Spring as Wing Chun Ideogram of RadiosaIdeogram when he and other practitioners of this style emigrated to the United States.
This transliteration, however, did not like the students to Ip Man remained in Hong Kong, because they realized that an abbreviation of the name would have been toilet and that this would not be a great advertisement for their art. So they preferred to use the transliteration Ving Tsun
After the death of Ip Man, Leung Ting founded his own independent organization, "Leung Ting Wing Tsun Martial Art Association", and decided, mainly for stand and for marketing reasons, to change the way to transliterate western characters in the name of the style: transliteration from Ving Tsun, switched to using the Wing Tsun.
The years that followed were a series of successes, Leung Ting took all his strength to spread the Wing Tsun. The number of students increased dramatically. They increased even more and more requests for public presentations and managed to also affect many girls, so as to open his own gym in a course for women only.
In 1973 the members were about 8000. This made it necessary to open branches in gymnasiums which were appointed responsible for experienced practitioners.
The Wing Tsun Leung Ting teaches, has changed and evolved with the passing of years. Now is very different from that practiced by other students Ip Man.
Leung began studying and researching the origins of Wing Tsun, going to learn about other branches of this art broke away in the generations prior to Ip Man, and also began to study and to make comparisons with other martial arts styles, including likely various currents Taai Gik Kyun (Boxing of the Great mand Polarity: Tai Ji Quan).
These studies have allowed her to evolve the Wing Tsun, succeeding on the one hand to maintain unchanged the principles that regulate it, and on the other to change the methods of training and teaching in order to more thoroughly study the use of body.
In this way he managed to keep the Wing Tsun alive and adopted it to the current times.
Thanks to the efforts of Leung Ting WingTsun Kung Fu has spread to many other countries, including the United States and Europe.
Currently the Wing Tsun system is taught and has spread around the world.