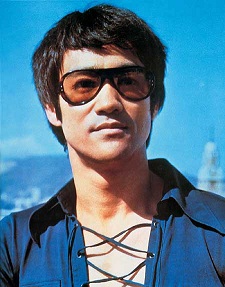 Bruce Jun Fan Lee was born in the hour of the Dragon, between 6 and 8 a.m., in the year of the Dragon on November 27, 1940 at the Jackson Street Hospital in San Francisco’s Chinatown. Penultimo di 5 figli Phoebe, Agnes, Robert, Bruce appunto e Peter il minore.Bruce was the fourth child born to Lee Hoi Chuen and his wife Grace Ho. He had two
older sisters, Phoebe and Agnes, an older brother, Peter, and a younger brother, Robert. Lee Hoi Chuen was, by profession, a comedian in the Chinese opera and an actor in Cantonese films. At the time Bruce was born, Mr. and Mrs. Lee were on tour with the opera company in the United States.

Bruce’s parents gave him the name “Jun Fan.” Since it is Chinese custom to put the surname first, Bruce’s full name is written Lee Jun Fan. The true meaning of Jun Fan deserves an explanation as it, too, would foretell the journey of the newly born Lee son. Literally, JUN means “to arouse to the active state” or “to make prosperous.” It was a common middle name used by Hong Kong Chinese boys in those days, understandably because China and the Chinese people
were very vulnerable at that time, and everyone, including Bruce’s parents, wanted the “sleeping lion of the East” to wake up. The FAN syllable refers to the Chinese name for San Francisco, but its true meaning is “fence of a garden” or “bordering subordinate countries of a big country.”

Another name given him was Li Xiao Long (李小龍; Pinyin: Lǐ Xiǎolóng), literally "little dragon", as it was born precisely at the hour and in the Chinese year of the dragon. This nickname emphasized their spirited nature, that during the childhood spent in Hong Kong on precisely led to clashes with the small youth crime. Until one day, injured in a fight, explicitly he asked the parents to be able to learn how to defend well. The choice fell on the prestigious school of Wing Chun whose teacher was Ip Man, with whom he studied for many years. Since then, Bruce never left the study of martial arts. 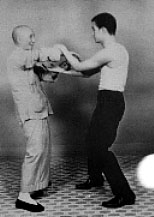 Although the introduction of Bruce Lee in martial arts is believed to be due to paternal transmission, actually Lee never studied Tai Chi (precisely transmitted from father to son) seriously. It was a style that did not fit absolutely to its unique characteristics, first among which is its incredible speed. From him he learned the basics of this ancient art, which is generally exercised to maintain some muscle tone. Lee studied diligently in Wing Chun Kung Fu style with sifu (Ip Man), collaborator and friend of Wu Ch'i-ta (master of Tai Chi). At first, Bruce studies with Ip Man was entrusted to William Cheung, a student of Man, and then continue up to eighteen in 1959, when he left for the United States. How many schools of Chinese martial arts of that time, during sifu Man was taught to high ranking students. One of the students of higher level was Wong Shun-Leung. It is believed that Wong had a profound influence on training Lee. Bruce was actually attracted to any combat discipline, so that you also trained in western boxing, winning in 1958 the inter-school boxing title. He tapped the three-time champion Gary Elms with K.O. the third round. But before we get to the final against Elms, Lee, he had beaten three boxers in the first round. He also learned the rudiments of western fencing minor Peter Li's brother, who was fencing champion. This approach to 360 ° distinguished gradually more and more Lee from any other martial artist, so much so that in 1966, he decided to name his unstyled 'style': Jeet Kune Do.

Lee became an icon especially for the Chinese, as a portrait of national pride for some sections and present nationalistic in his films. Some saw Lee as a model to gain a strong and effective body and a high level of physical well-being, while developing dexterity in close combat. Despite the violent content of his films, Bruce really was a peaceful person and firmly opposed to the use of martial arts as a method of offense and supremacy.
The May 10, 1973 Bruce collapsed in Golden Harvest studios as they proceeded with the dubbing of the Dragon. Seized with vomiting, high fever, and severe convulsions that interested the whole body, classic symptoms of dehydration, was immediately transported to the nearest hospital. Dr. Wu in particular (Neurosurgeon) found that there was an ongoing brain edema, ie the same disease that three months later killed him in his sleep. In that case he was administered promptly of Mannitol, a drug designed to reduce swelling to the brain, and Bruce survived. The day of death, but strangely not so much because the Equagesic contained over aspirin also a muscle relaxant, Bruce, who was resting, not accused any ricollegabile symptom in the previous collapse had in May. He had dinner at a restaurant with actor George Lazenby. Bruce met producer at 14.00 at home to discuss about the movie Game of Death. They worked until 16.00 and then went together to the home of Betty Ting Pei, Taiwanese actress. The three checked the script and, as Lee said he did not feel well yet, Chow went to the first appointment.

To relieve the headache of which Lee had complained shortly after arrival (migraine is one of the symptoms that precede un'edema) at home Pei, Betty made him take a Equagesic tablet containing both aspirin meprobamate. At 19:30 approximately, Bruce went to bed in the room saying they did not feel well again. Chow, seeing no sign of the two, telephoned Betty, who in reply said that he could not wake Lee. Chow is so rushed into the apartment, and after vain attempts to wake Lee, said Betty to call your personal physician. He rushed, spent about ten minutes trying to revive him, but to no avail. So it was decided to immediately carry him to the hospital by ambulance, at the Queen Elizabeth Hospital. There were no visible external wounds, and an autopsy ordered by Linda herself, dispelled any doubt about the cause of death. The brain of Lee, who on average in an adult weighs about 1,400 grams, it weighed 1575 (up 13%). In practice it was swollen like a sponge. The only two substances found in blood tests during the autopsy, were the two dell'Equagesic components, as well as small quantities of cannabis in the stomach and colon.

15 October 2005, Chow stated that Lee died from a hypersensitivity to the muscle relaxing, content nell'Equagesic (meprobamate). Meprobamate is a very common ingredient in painkillers. When doctors officially announced the death of Bruce Lee, he was declared by Dr. Langford who had died of an allergic reaction to one or both dell'Equagesic components. The final verdict was "accidental death" .Another theory is not official, says that Bruce died from a reaction of the combination Equagesic-cannabis, the time consumed in the form of hashish [citation needed]. Dr. Wu suggested, as a conclusion of the official report into the death, that Lee had to be hypersensitive to the drug or hashish, and that the role of cannabis could not be entirely excluded. To support his theory that, during the first collapse, in Bruce's body it was nowhere to Equagesic. The causes of Lee's death are still among the fans and millions of his fans around the world, the subject of discussion. The status of icon and the unusual death of Lee at a young age, he led several people to develop the disparate theories about his sudden death, some of which were cited in a special issue (almanac) of Martin Mystère came out in 1993, dedicated to 'Far East.

After Bruce's death, Linda returned to his hometown in Seattle, where he buried her husband in lot 276, Lake View Cemetery. His son Brandon Lee, today is buried alongside. Among the pallbearers at the second funeral (after the one in Hong Kong), held in the form strictly private in Seattle, there were: Steve McQueen, James Coburn, Chuck Norris, Dan Inosanto, Taky Kimura, Peter Chin and his younger brother, Robert Lee. 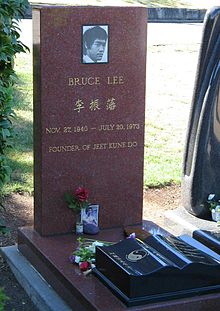 On the occasion of what would have been his 65th birthday (November 2005), a memorial statue was placed on the Avenue of the Stars in Kowloon, in his memory. As well as the memory of the man who was voted "Star of the Century" by insiders of the world of Hong Kong cinema. 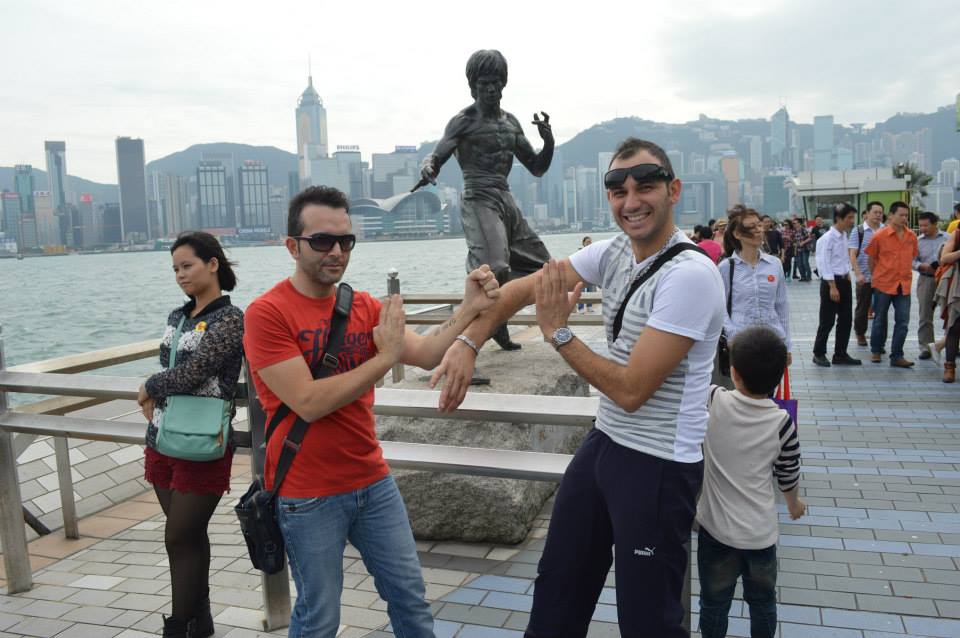 In 1993 he was also honored with a star on the Hollywood Walk of Fame in Los Angeles. 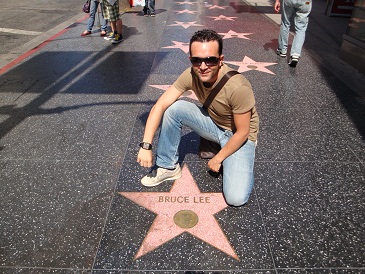